UPDATE 2019-10-06: This is the older edition of this blog post — I suggest that you click through and read the newer one.

Back in 2014, I wrote a series of blog posts to try to clear up confusion around where you can read and write files in Android. This post is an updated edition of the original post on internal storage.

This is the first post in a three-part series covering this storage model, to help clarify what is going on. Today, we will look at “internal storage”… including its various definitions.

Your users will eventually wander into Settings > Storage on their device — or the equivalent location, depending on their device model — and may see a screen that describes “Internal Storage”: 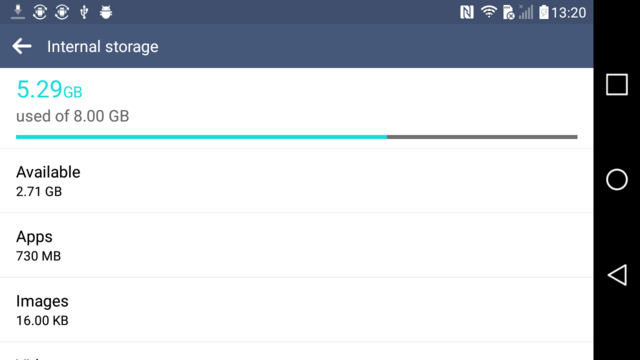 However, users may still see “internal storage” in places like an Explorer window in Windows, when their device is connected via USB.

If you read the Android documentation on internal storage, the description is… hand-wavy:

In truth, the Android SDK’s definition of “internal storage” is a specific directory, unique to your app, where your app can place files. As suggested in the docs, those files by default are read-write for your app and deny-all for any other app.

There are a handful of base methods on Context that give you access to internal storage, including:

(where your.application.package.name is replaced by your application ID, as is declared in the package attribute in the manifest or modified via Gradle)

This is really really dumb.

More importantly, internal storage is not always at the same place. Notably, we have the notion of separate user profiles, starting in Android 4.2 for tablets and Android 5.0 for phones. Each user gets his or her own “internal storage” area. While the aforementioned directory is still used for the primary user, that is not guaranteed, and it will not be used for secondary accounts.

The Device File Explorer tool in Android Studio 3.0+ can browse all of internal storage on an emulator, plus internal storage of debuggable apps on production devices. This should handle most of your scenarios: 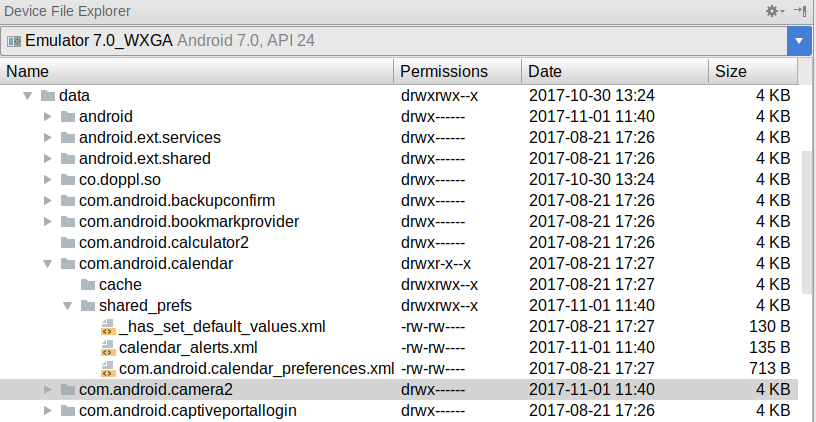 From the command line, you can use the run-as option with adb at the command line. For example, to download a database from the primary user’s internal storage to your development machine, you might use:

(And, no, that’s not a typo. We measured storage in megabytes back then.)

By the time the 2.3 devices were rolling out, internal storage might be as big as 1GB.

For Android 1.x and 2.x, internal storage was only really for small files, and you needed to use external storage for everything else. Android 3.0+ means that for most devices and most users, internal storage is fine for files that are not meant to be used routinely by other apps or accessible by the user independently from your app. Some power users, though, will find that even on-board flash is insufficient for what they want to store, so they turn to removable storage… which is a whole ‘nuther can of worms that we will get into later in the week.

Should I Make Files on Internal Storage World-Readable or World-Writeable?

Oh, $DEITY, no. Use FileProvider and serve that content via that ContentProvider implementation. Then, you at least have the option of using Android’s permission system to manage access to those files, versus having any app on the system be able to monkey with those files.

There are various risks in having multiple processes work simultaneously with files. Some subsystems, like SQLite, have built-in logic to deal with this. But if you are doing your own file access yourself (e.g., via File and Java I/O), then you have to somehow deal with simultaenous access, which can get tricky.

Finally, you do not know what the future might bring. Right now, you might view your set of apps as a tightly-coupled suite. Somebody who acquires those apps, or acquires your firm, might wish to go a different route. Using data sharing options that are more loosely coupled, like a ContentProvider, gives you greater flexibility than does assuming that your apps should co-mingle their files. In an ideal world, your app should treat other apps as a fairly-reliable but not always avaialble resource, just like you treat your own Web service.

Simple: don’t put files on internal storage. Users of rooted devices can access whatever they want on the device, so the only way to prevent them from accessing your data is to not have it on the device.